How can we help you today?

started a topic almost 4 years ago

1. The ability to see live trades and price movements as they happen. Right now it cant be seen without refreshing the page.

2. Make sounds to alert traders whenever their asks and bids are met. Right now its too quiet. I dont know whats going on.

3. Expand the chart to include all trades sold by the hour and minute. If it says for example, high 55, low 50, include in detail how many shares were sold at each price between 50 and 55. Expand the chart back to the market opening date rather than just the past 90 days with the ability to zoom in on each day. Include Yes and No prices. So instead of just seeing the yes price of 96. It will say something like 96 Yes/4 No. Add in the time to know exactly when the trades occurred, so it says 1pm ET instead of 1 hour ago.

4. Auto sell. If Im bidding on something and want to automatically sell them are soon as they are purchased, there should be an option for that. Example, bid 88, autosell each share at 89.

6. Expand the price table to include all 99 rows of possible asks and bids. Right now only 10 rows could be seen..

7. Add an x and edit button on the price table for orders. Lets say I have 300 bids opened at 85 for Trump and thousands of bids line up behind me but i want to reduce those bids to 50. The only choice available now is to cancel all and be sent to the back of the line. An edit feature allows traders to reduce it without affecting their place in line. The x button cancels the order. Better to have an x button next to the 85 cent bid below.in the picture where price action could be seen. 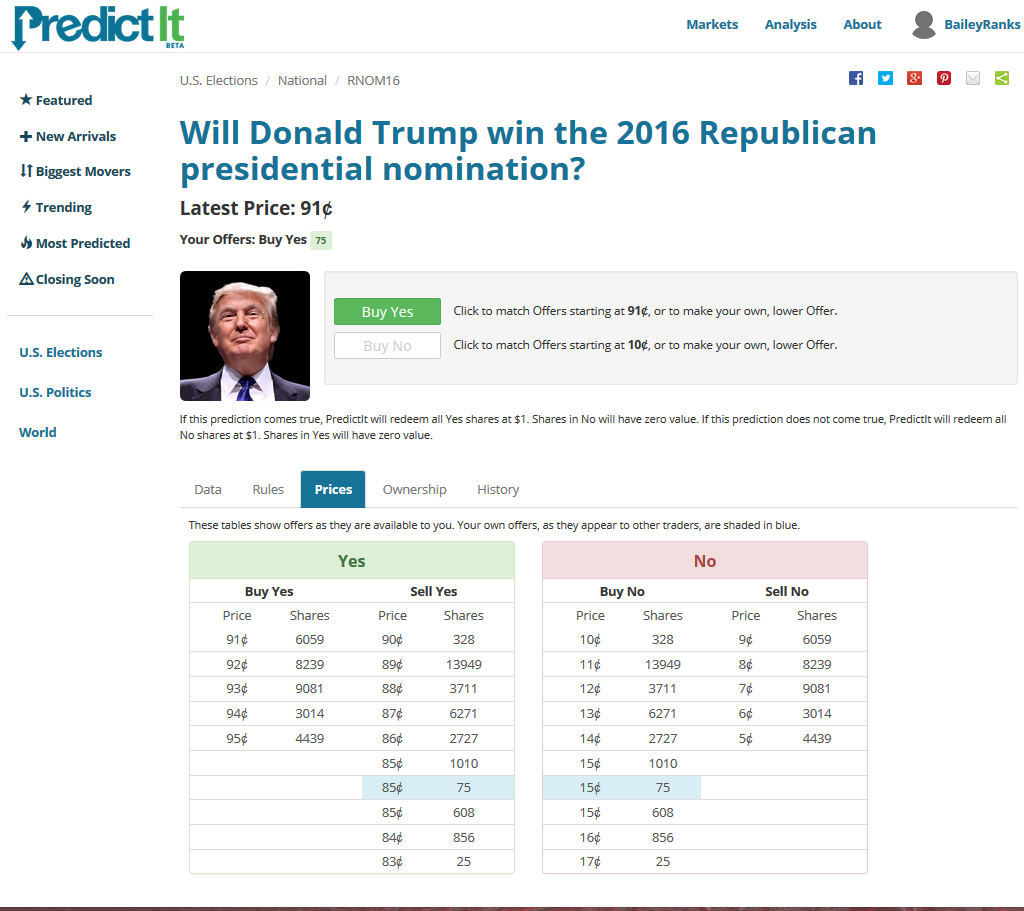 8. A buy all/Sell all button. if theres 100 shares available at the price I want but could afford more, The buy all button buys the rest at the next best price. Same with selling. If I got 500 shares I want to sell, but highest bid has less than that opened, It takes too many clicks wasting valuable time to execute the trade. Sell all sells the rest at the next best price in one click.

9. A profit for the day chart which includes fees.

11. Let traders choose what shares they want to sell if the shares were purchased at different prices. Right now, you could only sell in order. if someone buys an 88, then the market drops to 80 and they buy another share at 80 and want to flip at 81. Their only choice is to sell the 88 at a loss. That trader might want to sell the profitable share first.

12. A setting to let traders buy, sell and cancel orders immediately at the click of a button without being prompted. Its risky but that extra second is crucial.

"if someone buys an 88, then the market drops to 80 and they buy another share at 80 and want to flip at 81. Their only choice is to sell the 88 at a loss. That trader might want to sell the profitable share first."

. . . Maybe I'm misunderstanding this, but why would you want to sell the profitable shares first?  You would have to pay the 10% fee on the profit.  If the price goes down afterwards, below 81 and you then sell your shares you bought for 81, you wouldn't have to pay the fee.

. . . I would like to always sell the less profitable shares first, to save on that ugly 10% fee (the 5% fee to play in the markets is fine, but the 10% fee on profits distorts behavior).